Recession Explained: Causes and Impact in 2022 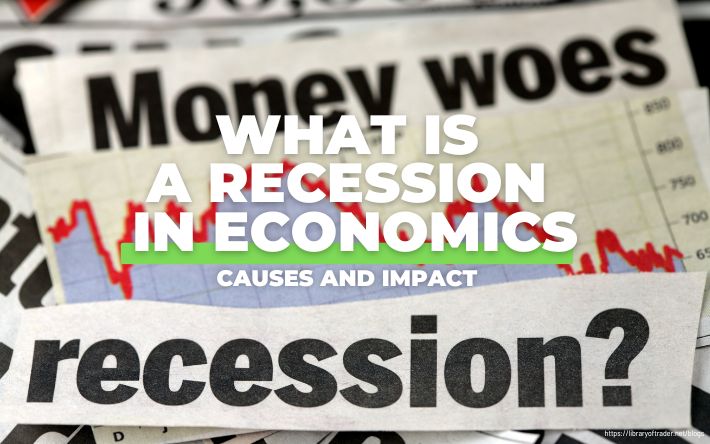 By the end of August 2022, words like ‘recession’ or ‘inflation’ increasingly make their appearances on big news sources and social media platforms. After the gas price broke global records over the past few months, people in the world immediately face a surge in the prices of basic necessity products. As inflation continues to reach every corner of the world, signs of an upcoming recession are also becoming clearer day by day.

Global recession observers have come to agree that there is a high chance for an upcoming recession to occur at some point in 2023 due to the current state of inflation and the actions that the banks have been taking to fight against the non-stop surge of the living standard. Changes regarding the interest rates are made daily by central banks in the U.S., Europe, and even Asia. That is just how serious you can see from the impact of both recession and inflation. If you want to learn more about recession’s meaning in economics and the subsequent causes and impacts, now is the time!

What is a Recession in Economics?

The definition of a recession in economics refers to a cycle of business where significant and widespread downtrends, usually globally, take over all activities of the economy. A recession often lasts for months before everything starts to bounce back. As generally agreed by market researchers, two consecutive quarters where the gross domestic product (GDP) of a country declines is an undeniable sign of an upcoming recession.

A recession can occur in either individual countries or the global economy as a whole. The risk of recession is usually deep, widespread, and persistent. Until now, there is still no way to mathematically confirm the start of a recession other than reports and research from economists as well as the mere observation of significant events with lasting effects on the economy.

Causes of a Recession

A recession is an unfortunate large-scale event that has a broad effect over a certain region, if not all over the world. It is the reflection of actions taken by consumers, product providers, companies, banks, and the like on the economy. As stated above, we cannot calculate to find the exact causes of a recession, but we can observe and identify signs that pose a great chance of leading to one, such as the slump in the GDP of a certain nation. Here are some of the other common signs that are universally considered the causes of a recession:

As the living standards surge, people who consider trading as their part-time job will surely make decisions whether to realize what is left in all available trades or retreat from the stock market during a recession. If a large-scale withdrawal occurs, it will create a rising fear among the trading community and stop any intention for investment, leading to a subsequent bear market that can put medium and small companies out of business.

The Loss of Confidence in Spending Money

When uncertainty reigns among social communities as people start to realize the signs of inflation and an upcoming recession, they are prompted to spend their money less and put into defensive mode, waiting for the recovery. The economy will create fewer job opportunities while businesses will lower their operation cost and decrease product outputs. As these situations get worse, unemployment will, in turn, significantly surge.

As stated above, to combat the rising living standards due to the sudden increase in gas prices, major central banks all over the world have taken action by adjusting the interest rates. However, this is considered just a momentary resolution. In the long-term, such action may even help to speed up the progress of getting to the next recession because liquidity will be more limited when interest rates rise.

Deflation, just like its counterpart – inflation, over time will have lasting negative effects on the economy. According to economists, what deflation can bring is just as worse as inflation does, but under the disguise of an ambiguous positive trend.

Deflation usually occurs after a recession or an economic crisis. At the time, manufacturers must lower their product prices as low as possible so that they can get rid of the old stock. Remember that we still have no progressive tool to identify when a recession will end, which is also the reason why consumers are more likely to just hold on to their money. Even if the prices continue to fall, they will just question themselves why they have to buy those products immediately while they can just wait even longer for even lower prices.

The process repeats itself, eventually worsening and prolonging the recession or even leading to another economic crisis.

The Impact of a Recession on the Global Economy

Those who survive thanks to the economy or have both indirect and direct interaction with it will be among the most affected. As a recession destroy the economy, everyone can easily see its impacts, displayed in numerous ways, including recorded numbers and global events:

A decrease in the need for products will lead to a fall in supply and output, which in turn pushes the unemployment rate higher. The manufacturing companies will lay off unnecessary workers and stop the hiring process for job vacancies to reduce the operation cost as low as possible. In the worst-case scenario, companies go bankrupt and that is where a large number of workers get temporarily removed from the labor market.

During a recession, companies will utilize any method they can to cut short the operation cost. One of them is trying to keep wages low. Instead of stopping labor contracts and releasing them, some companies decide to keep their men but also make some adjustments in the working hours so that they all can survive in such a difficult time. With this method, the rise of unemployment cannot completely reflect the situation. However, the workers will still see a substantial decrease in their effective income.

The two aforementioned results from a recession will eventually lead to this third one where the governments see their tax revenue greatly cut short. Despite the current state, they cannot immediately stop all planned welfare payments, leading to a situation where there is an increase in the budget deficit and the total amount of debt. Even after the recession, the governments must still sacrifice their tax revenue to stimulate the economy to bounce back as quickly as possible.

The Most Recent Recession

You may wonder ‘when was the most recent recession’. The world, especially the U.S. markets, has just witnessed the shortest but also the deepest recession ever recorded in the history of the U.S. recessions, now usually referred to as the ‘Covid recession’. It lasted just two months, starting from February to April 2020.

The event featured a drop that recorded approximately 31.4% GDP in the second quarter of the year ravaged by the Covid-19 pandemic. A great bounce back follows right after the economic plunge. The output was boosted by new policy stimulus, helping them to reach an increase of roughly 33.4%.

The pandemic recession was regarded as never-before-seen and unique in many ways, such as the ferocious contraction and the rapid recovery. Its short life is also somewhat out of the ordinary as a conventional recession example usually lasts at least two consecutive quarters with negative GDP growth.

Opportunities From a Recession

‘Where to invest during a recession?’ – you may ask. Finding opportunities in such a dark time is indeed hard, but still not impossible as there are still the pros and cons of a recession. The changes in the economy are also the chances for those who know how to utilize them for reducing costs, improving the statistics, and enhancing the ways the business is operated. Just remember being adaptable and flexible is the key.

Although all markets may be heavily affected by a recession, there will always be some certain sectors experiencing the impact not as severely as others do, such as those which require little or no physical equipment to run your business. For instance, a program development company can allow its staff to work from home, thus cutting all the costs of running a physical working environment. As the nature of the industry, IT workers can easily cope with the new changes without getting their work interrupted thanks to the mobility of devices like laptops and smartphones.

Another approach businesses can make use of is the much cheaper advertising services. Assuming that people will spend their time staying at home more and using social media platforms for entertainment, pushing your online advertisements during this period will more likely attract more awareness to your products and services. And when the markets go back to the way they were, you will be more than ready to take your business to a new height.

Recessions are indeed a tough time for everyone in the world even if they do not possess a personal business or depend on the financial or product markets to survive. However, nothing lasts forever, even the effects of a recession. As the economy bounces back, countless new opportunities will open for those in need. Hope this article gives you a better understanding of recessions and knowledge about preparing for a recession. Brace yourself, the storm is coming!