How Long Do Recessions Last?: Lessons From History 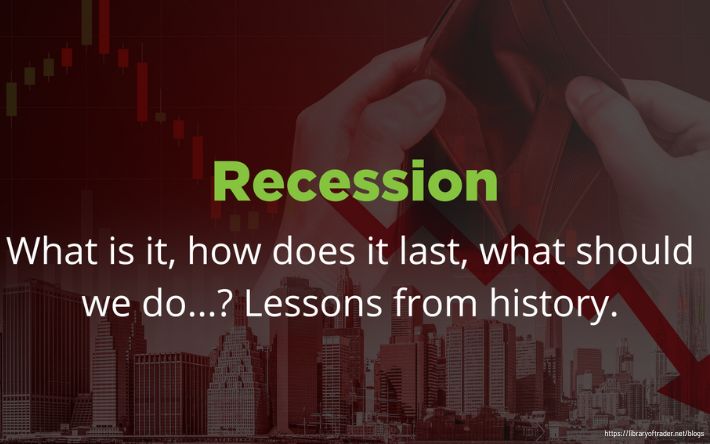 ‘How long do recessions last?’ has been one of the main concerns for those who are in the middle of chaos. It arouses curiosity about the reasons, effects, and possible solutions. This article walks you through the history of recessions to see what we can learn to better the present and potentially unpleasant economic downturns.

What Is a Recession?

A recession refers to a prolonged downturn lasting at least six months. It has profound and widespread effects on the economy, such as drops in economic output, consumption, and employment.

Two consecutive quarters of decline in national GDP typically lead to a recession. Economists find it common when a recession begins at the peak of the expansion and ends at the low point of the following downturn. Some indicators generating insights into this economic phenomenon are nonfarm payrolls, industrial production, and retail sales.

Ups and downs in the market happen all the time. So, do all the downturns mark a recession?

No, they don’t. Only when the drop in economic activity is deep, pervasive, and lasting, it becomes a recession. This definition is by the National Bureau of Economic Research (NBER). Yet, there are some odd cases like the economic downturn caused by the Covid-19 pandemic in 2020. The impacts are obviously profound when it only happened in a relatively brief two-month length.

What Causes a Recession?

Numerous factors, not only economic ones, contribute to a recession but also finance and psychology. Some experts concentrate on economic changes, such as the shifts in structure in industries.

For instance, a sharp and ongoing surge in oil prices can lead to a rise in costs across the economy. Or, the Covid-19 epidemic and the public health restrictions created a shock to not only our health but also the economy. This pandemic accelerates a recession as the whole world freezes under its influence.

Here are the top 12 common causes of a recession.

More specifically, people lose confidence in the growth of the economy so they will stop buying or turn on defensive mode. There will be fewer employment ads and retail sales will start to slow. Thus, manufacturers must cut down on their labor and production due to falling orders. It consequently leads to a rising unemployment rate.

Interest rates and liquidity have a close correlation. Specifically, the rise of interest rates limits liquidity. For example, the Federal Reserve has often raised interest rates to protect the value of the dollar. This policy can be a hedge against the stagflation of the late 1970s.

The defensive mode is on, which leads to the bear market when people start panic sales. Investors love to pause all their investments during tumultuous times of the financial crisis.

Homeowners have to cut back on spending due to the loss of equity. It is considered as among the main causes of the Great Recession of 2008. At the same time, banks lost money on complex investments based on underlying home values.

Policymakers have the authority to initiate a recession, especially when they remove important safeguards. For instance, the Garn-St.Germain Depository Institutions Act triggers the S&L crisis and the following recession. As it eliminated restrictions on loan-to-value ratios for these banks.

The whole economy consists of many businesses. If they do not run well, a recession can take place as an obvious result. The 1990 recession was the outcome of the savings and loans crisis. The failure of more than 1,000 banks in land flips, questionable loans, and illegal activities were the main reason behind it.

New laws or policies for wage and price controls can have reverse effects on the economy. A recession is among the possible scenarios.

For instance, President Richard Nixon froze wages and prices to reduce inflation in 1971. Yet, unemployment kept rising as employers made workers redundant for cost reduction. They could not decrease wages so they kept sacking employees, which started the 1973 recession.

World War II ended but its effects still echoed as the 1945 recession took place along with the pain of losses by wars. The situations were tough but got tougher for any citizens in not only the war countries and the whole world.

When the prices of gold, stocks, housing, etc. increase beyond their value, asset bubbles take place. The higher the prices are, the more people jump into the market with the expectation of phenomenal growth. Yet, bubbles will burst and the growth turns out to be downfalls.

Inflation indicates the rise of prices leading to the decline of consumption. Meanwhile, deflation refers to the decrease of prices over time. The lower the prices are, the more people buy products and services.

Yet, the prices of goods and services during deflation do not reflect their real values. Thus, demands will drop, which also leads to a recession.

How Long Do Recessions Usually Last?

The National Bureau of Economic Research (NBER) has the authority to determine the periods of recessions in the U.S. According to its data, the average U.S. recession lasts around 17 months from 1854. Yet, it shrinks to about 10 months from 1945 to 2020.

Of course, the longer a recession lasts, the more adverse the effects on the economy and people’s living standards can be. Yet, the length of time is still a relative metric. We cannot say a short recession is less severe than a long one.

Take the Covid-19 pandemic recession as an example. It happened more or less than two months, yet its impacts are still found in the present crypto winter and stock market crash.

How Long Does the Average Recession Last?

How long do recessions last on average? A recession has averaged around 11 months since World War II. The longer a recession lasts, the more negative the effects are on the gross domestic product (GDP). There are multiple factors impacting or triggering recessions, such as high-interest rates, the slowdown of production, an asset bubble burst, credit crunches, etc.

What Do Past Recessions Teach Us?

We will walk you through past recessions to see how long they lasted, why they happened, and how we made it back to the balance. As a result, we can draw valuable insights that help us not repeat the same mistakes and accelerate the rally.

Covid-19 pandemic was the time when the whole world seemed to have a break but with anxiety and fear. As an infectious disease without a comprehensive treatment then got involved.

The restrictions on going to public places limit business activities so the revenues drop. Then, the cutdown on production and employees pushed the whole economy into gloomy days.

The Covid-19 recession started in Feb 2020 and ended in April of the same year. The unemployment rate reached 14.7% and GDP dropped to 3.4%. At the time, the Federal Reserve jumped in and slashed interest rates to zero along with other actions to limit the damage.

Such decisive actions helped the Covid-19 recession to wrap up in a short period of time (only two months). Yet, the echo of this downfall is still in today’s brewing economic crisis.

One of the most notorious recessions in history is the Great Recession with more than 18 months. The unemployment rate was at 10% and GDP dropped to 2.6%.

The reason behind this recession was the subprime mortgage bubble burst. The complicated securities based on bad mortgages then spread to the whole financial system.

Before the bubble burst, financial institutions across the country escalated mortgages to borrowers with bad finances and poor credit histories. The dishonest mortgages were packed with mortgage-backed securities (MBS) as high-quality investments.

Housing prices consequently kept rising until major subprime lenders filed for bankruptcy as borrowers can repay their mortgages. It was time the bubble burst, which led to the corruption of many financial firms.

The ‘dot-com’ name indicates the rise of Internet technology from the late 1990s. It led to massive amounts of money flowing into ever less viable dot-com investments with low-interest rates.

The technology companies jumped into the game of initial public offerings (IPOs), which pushed stock prices out of control. The loop of the story took place when the stock prices of these companies did not reflect their intrinsic values.

Such bubbles ended up bursting as the Fed began raising interest rates in 1999 and 2000 to deal with an economically sluggish time. The Nasdaq lost around 77% of its value in the aftermath. It did not stop there when the September 11 terrorist attacks profoundly and emotionally impacted the whole world, not only the U.S.

All the events resulted in the Dot-Com recession with the unemployment rate of 55% and the drop of GDP by 0.95% in eight months.

The crisis of savings and loans (S&L) and the First Gulf War were two events triggering the recession of the early 1990s.

Inflation took off in the 1970s, which led to the rise of interest rates by the Fed as a hedge against higher prices. S&L consequently underwent extensive losses. Deregulation efforts were not working at that time, which drove the problem to worse situations. So, the industry was in the breakdown stage by the end of the 1980s.

Iraq’s invasion of Kuwait exacerbated the problems in real estate and housing from the S&L crisis. It doubled oil prices, increased unemployment to 6.8%, and dropped GDP to 0.1%.

The turbulence of the 1970s led to the U.S. inflation peak of 22% in 1980. The Fed chair’s plan caused an economic slowdown and a brief recession through a huge rise in interest rates. The rate of unemployment reached 7.8% while GDP declined to 0.2%.

The recession lasted until 1982 and became the worst economic downturn in the U.S., according to the Fed. Unemployment climbed to around 11% and GDP dropped by 1.8%  throughout this time.

Experts saw the bad effects of the Fed’s tight monetary policy plan in the fight against inflation in 1980. The recession became more intense due to a global energy crisis.

The fallout of The Yom Kippur War of 1973 was the main cause behind the major problems for the U.S. The Organization of the Petroleum Exporting Countries (OPEC) placed an oil embargo on the U.S. due to their support for Israel in the war.

The oil shock by quadrupling prices led to inflation and an international stock market crash. The unemployment rate got 9% and GDP got the bottom of 0.5%.

Review of Past U.S. Recessions

‘How long do recessions last?’ might not be the only question that people ask amidst the crisis. It comes along with why it happens and how it recovers. We can learn from our history as many recessions happened, including the most terrible ones.

At the end of the day, we all can find ways out no matter how bad the circumstances are. So, it is hoped that we can get through the present recession. And when the recession ends, we can welcome better days.