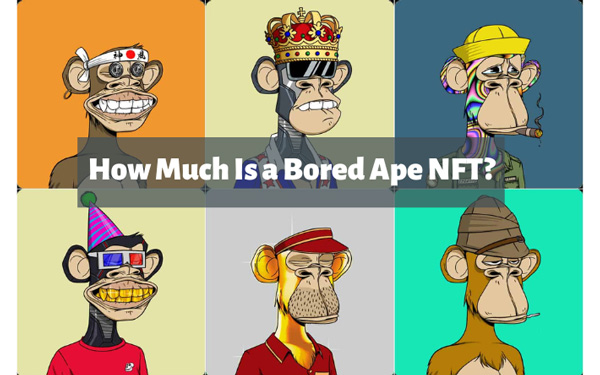 Bored Ape NFT is one of the most famous NFT symbols attracting many influential artists to trade or show the ownership of their one-and-only artwork. What is it? Why do many celebrities love it? How much is a Bored Ape NFT? This blog will address such aspects in detail so that you can have a better understanding of this rising club in the NFT world.

NFTs: Exactly What Are They?

NFT is an abbreviation of Non-Fungible Token . It is a cryptographic asset on a blockchain with unique code and metadata. The uniqueness of an NFT explains the part ‘Non-Fungible’ – irreplaceable by anything else.

Take Bitcoin , one of the salient representatives in the crypto world, as an example. It is also a crypto asset, yet it is replaceable as you can trade one for another bitcoin. This operation is not the same with NFTs.

As a result, people also call an NFT a one-of-a-kind trading card. When you decide to trade an NFT, you will still get an NFT but a different one. It is the same but different from cryptocurrencies .

How Do They Work?

The previous version of NFTs is the ERC-721 standard which determines a minimum interface of ownership details, metadata, and security, to exchange and distribute gaming tokens.

Then, the ERC-1155 standard upgrades the system into batching various types of non-fungible tokens into a single contract. As a result, the required costs for transactions and storage can decrease.

Cutting the intermediaries or middlemen, NFTs allow participants or related parties to directly connect with each other. So, it does not only cut down on expenses but also smooths the process of transactions and trading.

NFTs are now popular as a form of digital representation of real estate and artwork. One of the big advantages is that NFTs are based on blockchain technology which enhances security and direct connection between artists or owners and audiences.

Every NFT is a unique one, which shifts the crypto paradigm . Simply put, you cannot trade or exchange them at equivalency. You cannot replace one with another NFT, yet you can combine them with each other to “breed” a new unique NFT.

What Are The Types of NFT Art?

There are two main types of NFT art. The first type includes exclusive visuals in NFTs which can be seen as paintings in real life. The second is a collection of NFT art like the Bored Ape Yacht Club  – a form to profile pictures on social media.

Bored Ape Yacht Club (BAYC) , a.k.a. Bored Apes and Bored Ape, is simply an NFT collection based on the Ethereum blockchain. The way it works is the same with an NFT, enabling buyers to prove their ownership of one-off artwork.

This club was out to the public for the first time on April 23, 2021, as a private online club for intellectual property rights for artwork. The name Bored Ape explains why a buyer has an illustration of a bored-looking ape wearing accessories and random traits.

The note is that BAYC is not the only NFT choice for celebrities as many others share the structure and operation, such as CyberKongz, Doodles, Cool Cats, etc.

How Many Bored Ape NFTs Are There?

BAYC now contains 10,000 unique NFTs of around 170 assets. After only 12 hours for all of these bored apes, NFTs are to be sold at $190 (0.08 Ethereum). Such NFTs are also membership cards to the Yacht Club, including access to THE BATHROOM and a digital graffiti board.

The Bored Apes show up on social media with unique avatars of disinterested apes to show a digital brotherhood of sorts. The NFT members of the Bored Apes Yacht Club have the full rights of commercializing their apes.

More importantly, the access to additional NFT collectibles enables the holders to sell them to earn potential huge amounts of cash. Also, the holders can spin a Bored Ape into their wanted film, TV show, book, etc. This characteristic makes this club stand out.

The superior features of BAYC include Ethereum-based technology, the ability to spin a Bored Ape to the desired artwork like movies or books, full commercialization rights, etc. Yet, the factors that really help the popularity of this club spike are the mixture of celebrity influence, potential exposure to the public, and convenience for members.

The Participation of Famous People

Justin Beiber purchased BAYC NFT at $1.29 million in February. In June, Eninem and Snoop Dogg made a rap video sharing their perspective on Bored Apes.

The list of A-stars seems to be enough to attract the public’s attention. The heat of transactions or the hot deals is higher when such amazing figures join in the game.

The meetups between members have been in New York, California, Hong Kong, and the UK. The performances of Eminem, Snoop Dogg, LCD Soundsystem, Amy Schumer, etc. in the last June of the Ape Fest were noticeable activities.

Attention from the public indicates more chances to reach out to more people. The more crowded the market becomes, the more likely it is to have higher returns. The involvement of famous people leads to a run in sales and hype. These characteristics are what will describe a competitive but profitable market.

You can use the play-to-earn way while being a member of BAYC. Also, you can stake an NFT in exchange to get an associated cryptocurrency. Such flexibility makes it convenient for NFT holders.

How Much Is a Bored Ape NFT Worth?

The prime time of the club was in 2021 when it witnessed skyrocketing demand and generated $25 billion worth of trading volume. It even nearly reached $16 billion worth of organic trading in 2022. OpenSea , the market where Bored Apes are traded, stated its best single day of trading at $475 million on May 01st, 2022.

Good times seem not to last forever. The original collection of Bored Ape NFT dropped  to $150,000 – almost 72% over the last 30 days, according to CryptoSlam. The crypto winter by the Federal Reserve’s hiking of inflation rates is mainly responsible for such a downfall.

The market crash has a universal effect on all crypto coins including Ethereum whose technology BAYC is based on. Thus, the price fluctuation of NFT artwork is an obvious consequence as it cannot be immune to the tough time of Ethereum. The cheapest Bored Ape NFT is now around 152 ETH, or $429,000.

Is it the right time to invest in NFTs or join the BAYC? The chaos of price declines seems to add noise and decrease hype in the market. How to get a Bored Ape NFT cheap seems not to really matter as much as how to invest in the right item that generates long-term value.

Yuga Labs is a group of four people founding and developing the Bored Ape Yacht Club. Gordon Goner and Gargamel are two co-founders. No Sass and Emperor Tomato Ketchup joined later in the development period. First, all of them went by their pseudonyms until BuzzFeed reported the identities of two co-founders .

Gargamel is actually a writer and book critic named Greg Solano. Meanwhile, Gordon Goner is Wylie Aronow, a 35-year-old man living in Miami. After revealing their identities, they posted their pictures with their Bored Apes on Twitter.

Emperor Tomato Ketchup and Sass also followed when they also showed their images with short introductions of their names. Seneca, a freelance artist, was in charge of the art. Yet, she is not a member of Yuga Labs.

What Are the BAYC’s Next Steps?

In the flow of growth, the brains behind the Bored Apes Yacht Club have plans to expect dynamic breakthroughs.

It has released Ape Coin, the BAYC’s cryptocurrency, with more than 10,000 Ape Coins at the launching period. The value was around $100,000 then, which now drops to around $70,000 due to the profound impact of the crypto market crash.

Another exciting plan is that the Bored Ape’s metaverse is in the process. A metaverse is simply a virtual and blockchain-integrated space where hundreds or thousands of people own items with NFTs. Yuga Labs already sold the land for the metaverse and got back more than $300 million within a few hours.

Bored Apes seem not to be stable in the digital world, only. They reach the real world when handshaking with fashion brands, such as Adidas. The NFT project that the German shoe brand had with some NFT brands, including BAYC, was Into the Metaverse. Moreover, you can find Bored Apes in the industries, such as food, mobile games, etc.

The ways people take advantage of their Bored Apes are creative as the owners of Bored Apes have full commercial rights. For instance, Jenkins the Valet, a Twitter account of a Bored Ape owner, now has more than 60K followers. It is also signed to a real agency and has New York Times bestseller Neil Strauss write a biography.

Bored Ape Yacht Club is a digital club, yet it can generate value in the real world. The future holds its unpredictable events. So, stay tuned for the next updates!

How much does a Bored Ape NFT cost? The price heavily depends on the crypto market in general, and the status quo of Ethereum as the Bored Apes Yacht Club uses Ethereum-based technology .