What Is a Doxxed NFT? 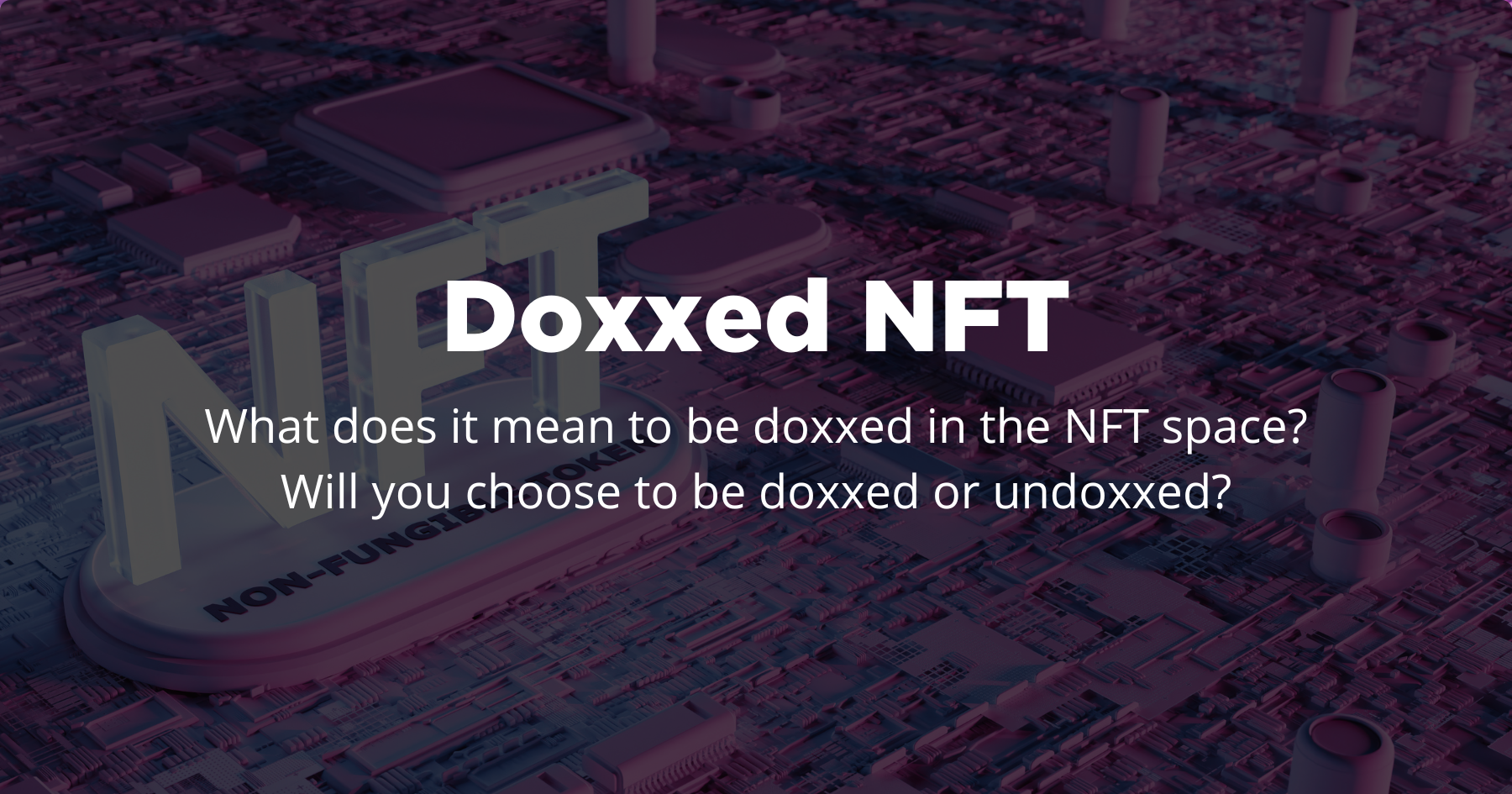 Doxing, sometimes written doxxing, refers to the practice of publishing personally identifying information about another person over the Internet. The term originates from the phrase dropping dox, which means document. Therefore, being doxxed is viewed as a negative experience. However, getting doxxed is a positive thing when it comes to NFTs. So, Let’s learn about what is a doxxed nft.

What Is a Doxxed NFT ?

Doxxed NFTs are ones whose founder’s identity is revealed publicly. When an NFT creator wants to gain the trust of their audience, they often dox themselves. Whoever doxes oneself is prepared to risk their own identity. Being doxxed is a badge of great traits in the web3 community.

However, in the crypto and NFT subculture, fictitious personas are standard practice. For example, Bitcoin was created by Satoshi Nakamoto, about whom very little is known. Ryoshi, the creator of the Shiba Inu, is also shrouded in mystery.

It’s worth noting that many people working in the NFT and crypto area also want to remain anonymous, instead using aliases and avatars when discussing sensitive topics online. It may be seen as a preventative step against hackers by some. For others, it’s just another aspect of crypto society, where alternate identities and virtual worlds like web3 are commonplace.

Why Is It Called Doxxing ?

Dox is an acronym for documents, and in the hacker subculture of the 1990s, dropping dox meant making someone’s private information public without that person’s permission. Certain subcultures and the mainstream media continue to use the term doxxing in this context.

Beyond the realm of hackers, the term doxing has come to mean the public disclosure of private information. While the word is still in use, the anonymity of internet users is less of a concern now that we all use our real identities on social media.

What Does It Mean to Be Doxxed in Terms of NFT Space?

Doxxed signifies nothing more than being outed as a real person in the web3 space. It’s also worth noting that the phrase isn’t always associated with negative intent, unlike the original meaning. If an NFT project boasts that they are completely doxxed, it usually indicates that all team members are using their real names and aren’t trying to hide their identities.

In the NFT community, getting doxxed is a badge of trustworthiness. Teams that are doxed are open about their composition, history, and aspirations. One of the first considerations when valuing an NFT brand is whether or not the team has chosen to be doxxed, which has advantages for both the creators and the consumers of the brand. Being doxxed in the NFT space also yields some of the following benefits.

Benefits of Being Doxxed for NFT Creators

If you’re an NFT creator with nothing to hide, then you should get doxxed for several upsides. First of all, you can build trust with your community which leads to huge potential customers. And if you’ve been doxxed, you will have the opportunity to establish a reputation for yourself and your business. This is an easy way to utilize your consumers’ current success for future ventures.

Furthermore, establishing a rapport is crucial to cultivating long-lasting and real NFT communities. Due to the fact that customers are forming online communities centered on their favorite businesses and other individuals who share similar interests, getting doxxed in the NFT space helps your community learn more about the real person behind the brand.

One more benefit of being doxxed is gaining respect. In addition to the respect you get from individuals in your inner circle, there is the respect you earn from within yourself, which is based on your deeds. There is also the respect one earns from the general public. Since your motivations are honorable, there’s no need to conceal who you are.

Being doxxed in the NFT industry is optional, but it has great benefits for both creators and consumers

Benefits of Being Doxxed for NFT Consumers

Being doxxed in NFT is not only beneficial for the creators but also for the consumers. The more open and honest the team is behind an NFT brand, the more likely consumers are to have faith in the product. Furthermore, when buyers are doxxed, they may readily investigate the brand’s founders. This bodes well for a company because people are more open to purchasing their products.

Apparently, one of the most essential qua lities of a successful business is transparency. The better off customers are, the more transparent a business is about its goals. Customers are able to make more informed selections and know if the product they are purchasing meets their needs when it is completely open.

Being doxxed in the NFT industry, more crucially, may assist provide customers peace of mind. One of the most reassuring experiences as a customer is certainty, both in terms of what you’re purchasing and who you’re buying it from.

To Be Doxxed or Undoxxed?

NFT founders with the purpose of developing a long-lasting and sustainable brand often choose to be doxxed. Those that choose to stay anonymous may be hiding something, or they may lack faith in their own abilities to carry them out. Furthermore, some people may choose to avoid being doxxed for personal safety.

In the realm of NFT, more and more project teams will likely be totally doxxed as the NFT sector develops. The marketplace will undoubtedly want to see a higher degree of trust, particularly if this business gets mainstream.

However, if you’re a part of the NFT industry, you have the option of remaining un-doxxed, and this is a right that is typically honored. It’s up to you which direction you go in the metaverse.

Should You Only Buy NFTs From Doxxed Teams ?

If you purchase an NFT from a team that has been doxxed, you can pursue legal action against them if anything goes wrong. So, cautious buyers might want to consider going with a doxxed team. Successful companies like Bored Ape Yacht Club first debuted without doxxing its NFTs, therefore investing in un-doxxed NFTs is not significantly riskier. Whether or not you should exclusively rely on doxxed NFTs is a decision that requires careful thought.

However, as the NFT market develops and purchasers demand more trust in these projects, there will certainly be a rise in the prevalence of completely doxxed project teams. If a project has a lofty road map, significant technological risks, or if the value of the project is related, at least in part, to the previous (or even future) track record of its founders, then anonymity may be good for buyers of NFTs but not so much for their creators.

There are always dangers involved with buying an NFT, regardless of whether the project team is doxed or not. It’s not just about scams, but also from poor execution and a lack of product-market fit, among other sources of project failure.

Do People Voluntarily Get Doxxed in NFTs?

The answer is properly no. Most of people will research the company’s founding members and their backgrounds before putting down any money, even if the company is already well-known in the industry. To make matters worse, many NFT and crypto projects’ creators employ pseudonyms while releasing currencies and releasing collections. In addition, there seems to be an increasing number of cases of hostile actors using aliases.

Doxxing has grown widespread in the crypto community for these reasons. It has progressed from its original use as a form of cyberbullying to being used to verify identities and punish wrongdoers. Concerningly, although some people freely come forward and divulge their names, others are doxxed without their knowledge or consent.

Some people think that disclosing the identities of industry leaders might help stabilize a risky asset class. Others, though, are concerned that it might put crypto startup owners at risk of being hacked.

The community, meanwhile, is calling for doxxing as the frequency of frauds and rug pull incidents increases. Here’s where professional doxxers come into play. Many prominent crypto and web 3 frauds have been exposed because of the efforts of independent investigators like ZachXBT and CipherBlade. In order to keep the community informed of any potential criminal activity, they often dox the people involved.

You can choose whether or not you want to be doxxed in this NFT space. But an informed and prudent investment in a doxxed NFT is essential to reaching your goals. Doxxed NFT’s future is uncertain, but when the metaverse is on the rise, you’ll have the option of either being un-doxxed as is your legal right or being doxxed as is your right if you want to gain greater trust from your community .