What Does It Mean to Think Like an Economist 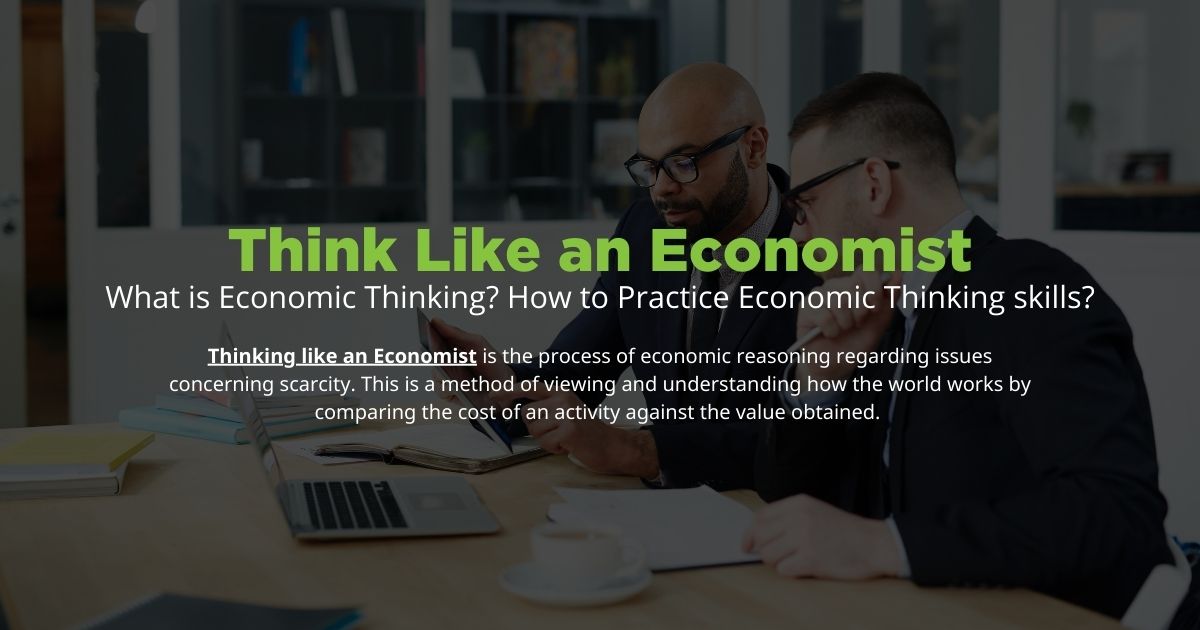 Thinking like an economist may help you avoid illogical judgments, assist professionals in making better decisions that influence their life, and help you better comprehend your surroundings. When you learn to think like an economist, you will notice that practically all decisions become clearer, from something as simple as where to go for dinner to whether to start a new job or return to school for a master’s degree.

Continue reading this blog to learn how to think like an economist. The future may hold a bright future for you as an economist.

Thinking like an economist, at its most fundamental, entails analyzing facts without allowing opinion or logical errors to enter the equation. Economic theory is primarily about scarcity, the premise that everyone-individuals, organizations, and governments-only has a limited number of resources and must decide how and where to allocate those resources. Economists assess the “cost” of individual and social decisions in order to find the best options for themselves or others in the face of scarcity.

What Should Be the Fundamental Mindsets of Every Economist?

Creating an intellectual toolbox comparable to the economist’s can assist you in making better decisions in your career and personal life. The foundation of economic thought is comprised of three fundamental concepts:

What you give up is what you pay for.

One of the most common misconceptions that an economist’s mentality may help you overcome is sunk cost. Simply put, a sunk cost is any expenditure that has already been committed and cannot be recovered regardless of future results.

Consider the following example: You buy a movie ticket and settle down, only to discover halfway through that the film is terrible-what do you do? Most individuals will stay to the finish, believing that if they leave, their money would have been “wasted.” But, if you think like an economist, you realize that sunk costs have already been deducted.

There is a brief mention of Ukrainian pole vaulter Sergei Bubka in An Introduction to the Economics of Information: Incentives and Contracts by Inés Macho-Stadler and David Peréz-Castrillo, who broke the world record in pole vaulting 35 times between 1986 and 1995. That is an extraordinary performance by any standard, but it becomes more sensible (and more relevant to the topic of thinking like an economist) when you grasp Bubka’s incentives.

At the time, the Soviet Union offered athletes $30,000 for breaking a world record. Bubka, thinking like an economist, determined that instead of breaking the world record once, he would break it 35 times, earning himself more than $1 million.

Economics is the study of human action in the face of scarcity. People have endless wants, yet we live in a world with limited resources. Because of this, humans must make decisions, and decisions imply trade-offs. People’s decisions are impacted by the incentives they experience, and those incentives are modified by the institutions-game rules-under which they live and interact with others. Let’s find out which incentives, which ways of thinking affect the economists.

There ain’t no such thing as a free lunch

The TANSTAAFL notion should be considered while making many sorts of decisions, whether financial or lifestyle-related. By taking into account all indirect and direct costs and externalities, the notion can help customers make better decisions.

TANSTAAFL is an economic term that refers to the notion of opportunity costs, which argues that for every option taken, there is an alternative that was not picked that would have also produced some benefit. Decision-making necessitates trade-offs and believes that there are no genuine freebies in society. Products and services given (for free) to persons, for example, are paid for by the person making the present. Even when there is no one to incur the direct expenses, like in the case of negative externalities such as pollution, society bears the burden.

‘Don’t cry over spilt milk’, as the saying goes, signifies that what’s done is done. Only future opportunity costs should be considered in our decision-making. Past expenses have been “sunk.” The movie example is a common example used to demonstrate the sunk cost fallacy. You pay $15 to watch a movie, and an hour into it, you understand it’s terrible and will only get worse. Your gut sense, though, is that you should remain and receive your money’s worth. That is poor economic reasoning. The $15 has been depleted, so don’t waste the remaining two hours of your important time—get up and leave.

Margins and Thinking at the Margin

It signifies to consider your next step forward. The term “marginal” indicates “extra.” On a hot day, the first drink of lemonade quenches your thirst, but the second glass may not. When you think at the margin, you are considering what the next or further action will entail for you.

Voluntary Exchange Is Win-Win That Creates a Bigger Pie

Entrepreneurs get wealthy when they develop a product or service that benefits a huge number of people. Unless the businesses were given special treatment by the government, they did not take money from their clients forcefully.

The resentment aimed towards “the affluent” stems from the mistaken belief that the economy is a fixed-size pie. In other words, those who criticize the “filthy affluent” feel they took too large a piece of the pie, leaving less for the rest of us normal people. In truth, these entrepreneurs made a larger pie, and voluntary trade is a win-win situation. The entrepreneur benefits (as do the staff he or she recruits), and the customers benefit.

Intentions and outcomes are not necessarily synonymous. The economic style of thinking encourages us to evaluate the unexpected repercussions of our own or politicians’ actions. Just because something sounds wonderful or feels correct doesn’t imply it will be accomplished. In reality, the condition that is being treated may worsen.

Sound economic reasoning also removes blinders. The impacts of a policy on all groups, not just one, are addressed. This enables citizens to see through politicians’ promises that a program would safeguard American employment when, in reality, just a small minority of Americans will gain at the expense of others. When governments seize money (i.e., taxes) to build sports stadiums under the guise of “creating employment,” they make the error of focusing on the visible jobs while ignoring the unseen—the opportunity cost of those tax dollars.

To Think Like an Economist, What Skills Are Essential?

Economists gather and analyze data, explore trends, and evaluate economic concerns to examine the production and distribution of resources, products, and services.

Economists frequently research previous patterns and forecast based on them. They do data investigation and analysis utilizing a number of software applications. They occasionally offer their studies to a variety of audiences.

Economists should also have the following characteristics:

Learning to think like an economist may bring a lot of value to your life and help you make difficult decisions. There is so much more to say about economics, and there are so many more instances of economic thought that I might have included. Some describe economics as applied common sense; nonetheless, economics also provides us with surprising insights. This is the beauty and strength of economics.