How to Use RSI Indicator 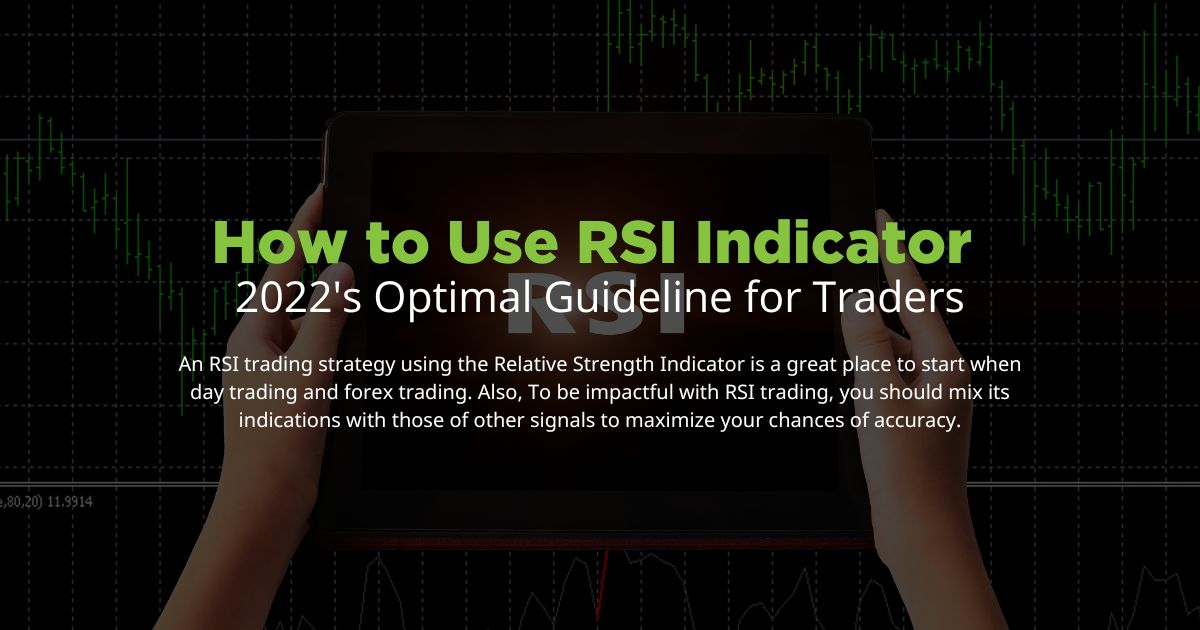 The relative strength index (RSI) is a momentum indicator that measures the size of recent price fluctuations for various assets to determine whether they are overbought or oversold. J. Welles Wilder Jr., a technical analyst, introduced the index in his book New Concepts in Technical Trading Systems in 1978.

The RSI indicator, along with other technical indicators, is used by market statisticians and traders to find chances to enter or leave a position. Continue reading for a better understanding of how to use this signal in trading.

What is the Relative Strength Index (RSI)?

In technical analysis, the relative strength index (RSI) is a momentum indicator. The RSI examines the speed and amplitude of a security’s recent price swings to determine if it is overpriced or undervalued.

The RSI may do more than just identify overbought and oversold stocks. It can also reveal stocks that are ready for a trend reversal or price correction. It can tell you when to purchase and sell. Historically, an RSI value of 70 or higher indicates an overbought condition. A number of 30 or less suggests that the market is oversold.

How does the Relative Strength Index (RSI) work?

The relative strength index, as a momentum indicator , compares a security’s strength on days when prices rise to its strength on days when prices fall. Relating the outcome of this comparison to price movement might provide traders with insight into how an asset may perform. When used with other technical indicators, the RSI may assist traders in making more educated trading decisions.

The RSI is most commonly utilized during a 14-day period and is assessed on a scale of 0 to 100, with high and low values denoted by 70 and 30, respectively. Shorter or longer periods are used for shorter or longer forecasts. High and low levels, such as 80 and 20, or 90 and 10, occur less frequently but suggest more velocity.

How to calculate the RSI Indicator?

This is the calculation of RSI Indicator:

RSI has been split down into its simple components to simplify the mathematical explanation: RS, Average Gain, and Average Loss. This RSI calculation is based on 14 periods, as recommended by Wilder in his book. Losses are stated as positive numbers rather than negative numbers.

The following estimates are based on the historical averages and the present gain loss:

Adding the preceding and current values is a smoothing approach comparable to producing an exponential moving average. This also indicates that as the computation time lengthens, the RSI readings grow more accurate. SharpCharts calculates its RSI values using at least 250 data points previous to the start date of every chart (if that much data is available). A formula will require at least 250 data points to precisely duplicate our RSI readings.

Wilder’s formula normalizes RS and converts it into an oscillator with a range of zero to 100. In reality, an RS plot appears exactly like an RSI plot. Because RSI is range-bound, the normalization step makes it simpler to recognize extremes. When the Average Gain is equal to zero, the RSI is also zero. In the case of a 14-period RSI, a 0 RSI value indicates that prices went lower for all 14 periods and there were no gains to measure. When the Average Loss is zero, the RSI is 100. This indicates that prices rose in all 14 periods and there were no losses to account for.

RSI: Why Is It So Important?

The relative strength index has certain unique characteristics, which make the RSI become such an important trading instrument.

We all know that pattern development is an intriguing occurrence in chart construction. Any pattern, whether reversal or continuation, will lead to a breakout at some point in time.

It’s worth noting that RSI takes into account a stock’s underlying relative strength over a given time period. Such a breakthrough will occur at least 2-3 days before the price, which will follow in due order.

The notion of advance breakout and collapse works exceptionally well with the OBV indicator. The same principle applies in the case of RSI. When the indicator (RSI in this case) has surpassed the previous peak and the price has not, an advance breakout has occurred.

In the relative strength index, the mid 50 line is a critical line for indicating price direction. During the bullish phase of the market, the price generally remains above the mid 50 line, while during the negative phase, it encounters severe opposition from the 50 line in RSI.

However, there may be a lot of whipsaws in the daily chart, therefore it’s best to look at a larger time frame chart, such as the weekly chart.

When the RSI falls below 30 (oversold), bounces above 30, pulls back, remains above 30, and then breaks its earlier high, a bullish failure swing emerges.

How to Read the RSI Indicator?

In general, when the RSI indicator on the RSI chart reaches 30, it is a bullish indication, and when it crosses 70, it is a negative one. In other words, RSI levels of 70 or higher suggest that an investment is becoming overbought or overpriced. It might be setting up for a trend reversal or a corrective price retreat. An RSI reading of 30 or below implies that the market is oversold or undervalued.

An overbought security is one that trades at a price that is higher than its real (or inherent) worth. That is, it is valued more than it should be, according to practitioners of either technical or fundamental analysis. Traders who see signs that an asset is overbought may anticipate a price correction or trend reversal. As a result, they may decide to sell the security.

The same logic applies to an asset identified as oversold by technical indicators such as the relative strength index. It may be trading at a lower price than it should be. Traders on the lookout for such an indicator may anticipate a price correction or trend reversal and purchase the securities.

Which Indicators Can Be Best Used With RSI Indicators?

Caption: Before acting on RSI, it is a good idea to acquire confirmation from another trade signal.

Another frequently used momentum indicator, the moving average convergence divergence, can be utilized in conjunction with the RSI to assist corroborate the veracity of RSI indicators (MACD). Unlike the RSI, this indicator determines momentum by comparing the relative positions of a short- and long-term moving average.

Traders use the MACD to look for signals of momentum deviating from price. While the price may continue to rise, with the RSI being overbought for some time, the MACD demonstrates divergence by beginning to drop down as the price rises. This adds to the evidence that a market is approaching a point of overextension and, as a result, is likely to retrace shortly.

Moving average crossovers may also be used to corroborate RSI indicators of overbought or oversold conditions in a market. The RSI is frequently used to acquire an early indication of potential trend shifts. As a result, using exponential moving averages (EMAs) that respond faster to recent price changes might be beneficial.

Moving average crossings that are relatively short-term, such as the 5 EMA crossing over the 10 EMA, are most suited to supplement RSI. The crossover of the 5 EMA from above to below the 10 EMA verifies the RSI’s hint of overbought circumstances and a potential trend reversal. An upside crossing, on the other hand, indicates that a market may be oversold.

The smoothed RSI indicator may also be obtained by applying the EMA procedure to the RSI itself. The smoothed RSI is less jittery than the RSI indicator, resulting in fewer false positives and more clearly defined trends. Smoothing RSI using an EMA, on the other hand, makes RSI slower to respond to actual changes because all EMAs add delayed factors.

Although traders typically employ RSI on shorter time periods, it may be utilized with inputs of weeks or even months rather than days, hours, or minutes. It is feasible to connect short-term transactions with long-term trends by adopting a larger time period. If the monthly RSI remains relatively low and increasing, a daily RSI buy signal is more likely to be successful.

Similarly, a high and falling monthly RSI indicates that a daily RSI purchase signal is most likely a false positive. Finally, if the monthly RSI is very low and dropping, a daily RSI buy signal might signify the start of a new bull market.

How does RSI work in trading?

It reflects the current trend strength in relation to past eras. The stronger the rise, the higher the index value. If the indicator rises to the overbought zone, above 70%, it indicates that the market has overheated and that the trend must soon move sideways or down. The same holds true for the bear market, but in reverse order.

How can I trade using the RSI?

How do I customize RSI?

Is the RSI a reliable indicator?

There are no positive or negative signs. Some traders are unable to successfully employ technical tools. The RSI technical indicator is the same way. Trading results will be excellent if an expert uses the RSI. A word of advice. Practice RSI trading on the LiteFinance demo account, and experiment with combining the oscillator with patterns and other indicators. When used correctly, the Relative Strength Index is an excellent indicator.

What is the ideal RSI time frame?

Signal accuracy is determined by a mix of numerous elements, including customs, period, trade asset, and current volatility. One strategy involves trading over different periods. When the indications in the shorter period are validated, you initiate a short-term trade after analyzing the overall scenario in a long-term chart.

However, due to market noise, the shorter the duration, the more misleading indications occur. However, the indications are extremely common.

The RSI is a time-tested and adaptable momentum oscillator. RSI is as important now as it was in Wilder’s day, despite changes in volatility and the markets over the years. While Wilder’s initial interpretations are important for understanding the signal, Brown and Cardwell’s work elevates RSI interpretation to a whole new level. Adapting to this level necessitates considerable rethinking on the part of normally educated chartists.