How to Use Aroon Indicator: A 2022 Complete Guideline 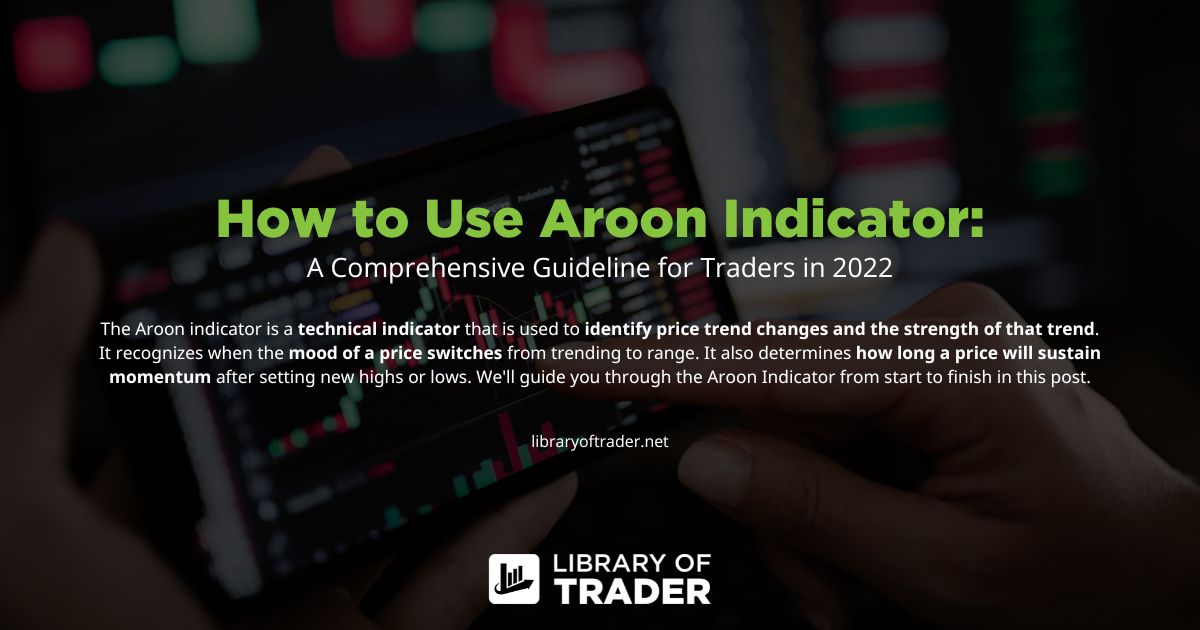 The Aroon indicator is a technical indicator used to identify price trend changes as well as the strength of that trend. In essence, the indicator gauges the duration between highs and lows during a certain time period. The notion is that strong uptrends will see new highs on a frequent basis, whereas strong downtrends will see new lows on a regular basis. The indication indicates when something occurs and when it does not.

What Is the Aroon Indicator?

When buying and selling forces reach an excessive degree, traditional momentum oscillators suggest that a reversal is imminent. As a result, trading decisions based on indicators such as RSI, Stochastic, or ADX are frequently less lucrative. Using the Aroon indicator, on the other hand, can provide you with a clearer picture of market mood, particularly when a new trend will begin.

The Aroon oscillator is made up of two indicators:

Both Aroon indicators are given in percentages, with a scale of 0 to 100. To facilitate comprehension, the Aroon up and down lines are drawn side by side.

How to Calculate the Aroon Indicator?

The Aroon indicators are not as difficult to calculate as you would imagine. It only needs tracking the high and low prices of an asset for the number of periods utilized in the algorithm. As previously stated, practically all use Tushar Chande’s suggested 25 periods for the Aroon indicator calculation.

The Aroon Up and Aroon Down lines oscillates between 0 and 100, with values near 100 suggesting a strong trend and values around 0 indicating a weak trend. The lower the Aroon Up, the greater the downtrend and the weaker the upswing, and vice versa. The basic assumption underpinning this indicator is that a stock’s price would close at new highs on a regular basis during an uptrend and at new lows on a frequent basis during a downturn.

When both indicators go below 50, it may indicate that the market is consolidating. There are no new highs or lows being set. Traders should look for breakouts as well as the next Aroon crossing to see which way price is heading.

How does the Aroon oscillator differ from Aroon Up/Down lines?

In addition to the standard Aroon indicator, there is an which has only one line.

The Aroon oscillator line represents the difference between the Aroon-Up and Aroon-Down readings. The tool aids in the definition of trend phases (starting, peak, and finish); it also identifies the beginning and conclusion of price sideways movement. The conventional indication is shown in the bottom window of the Aroon chart above, and the oscillator is shown above.

The oscillator gives clear and simple signals. Traders look for zero line crosses to indicate possible trend shifts. A purchase signal emerges when the oscillator line moves from the negative to the positive zone; a sell signal appears when the line moves from the positive to the negative zone. If the Aroon oscillator values are between 40 and 100, it suggests a bullish trend; if the readings are between -40 and -100, it signals a definite negative trend.

Aroon Indicator Signals: How to Read Them?

Let’s talk about the Aroon trading signals, which are very successful in the Forex market as well as in CFDs, stocks, and binary options trading. The Aroon indicator’s application is based on the reading of various signals.

The trend is determined by the position of the lines relative to each other at levels between 30% and 70%. Aroon-Up increases beyond 70% and can reach 100% during an upswing. In a decline, Aroon-Down goes below 30%, perhaps reaching 0%.

The crossings of Aroon’s lines are the major signal. When the Aroon-Up line crosses the descending Aroon-Down line from the bottom up and gets over the 30% zone, it is a buy signal. A fresh upswing normally begins at this point, providing an excellent entry opportunity for a long position.

The readings of the Aroon chart indicator offer very precise information about the direction of the price movement and the intensity of the current trend, as well as the stage of trend development.

When Aroon lines move in parallel, traders normally do not consider it an entry indication. The parallel movement of the lines most typically indicates price consolidation, which is frequently followed by a price breakout.

The Aroon Indicator: Advantages and Disadvantages

The Aroon indicator, like other technical analysis tools, has advantages and disadvantages.

Which are the Aroon Indicator strategies to use in trading?

This Aroon indicator technique is focused on trading when the trend direction shifts dramatically. As previously stated, a parallel movement of the Aroon-Up and Aroon-Down lines indicates a price consolidation, which will invariably be followed by a fresh price breakout. As a result, in order to increase your investment, you anticipate a breakout and enter a trade in the direction of the new trend.

When there is a strong trend, the Aroon indicator lines linger near the highest levels. Traders frequently utilize this feature to benefit. When the lines reach their maximum values, the method proposes entering a trade; this is 70% for the Aroon-Up and 30% for the Aroon-Down. The trend direction is determined by the direction of the previous crossover of the lines. When the center line is crossed or the reversal signal, the opposite crossover of the Aroon lines, appears, the profit is taken.

Both of the trading methods outlined above may be used for binary options trading. The breakout trading approach is ideal for short-term contracts. Long-term contracts might benefit from the trend strength method. Furthermore, the expiration date should be considered in order to settle the contract before the trend reverses in the other way.

A trading technique based on the combination of the Aroon and the EMA is also available. When the Aroon-Up crosses the Aroon-Down from bottom to top and the price chart is below the EMA, the Put signal occurs. When the red line breaks through the blue line on the downside and the contract price is above the EMA, this is an opposite signal.

The Best Indicators to Use With the Aroon Indicator

The Aroon indicator has all of the required characteristics to serve as a reliable price barometer, but it is not recommended to rely only on it. In financial trading, we forecast price movement using a variety of formulas. When the likelihood is high, the price is more likely to follow the direction. As a result, when we combine numerous indications based on their performance, we may stack the odds in our favor.

The Moving Average (MA) displays the average price of the candles in a certain time period. As a result, when the price goes above the 20 EMA (Exponential Moving Average), we may assume that the underlying trend is positive.

Meanwhile, if the Aroon indicator indicates the same price direction, we may consider the trade to be genuine.

The Aroon indicator complements MACD excellently. When MACD and Aroon both point in the same direction, you can consider the trend to be strong.

Price action traders place trades based on price movement, support/resistance levels, and indicators. As a result, if you wish to purchase based on price rejection from any dynamic or static support level, you may utilize the Aroon indicator to confirm the entry.

What is the Aroon Indicator?

The Aroon Indicator is a form of technical momentum oscillator that helps traders to assess if an asset is trending, in which direction it is going, and how strong the trend is. It may also be used to detect nascent trends and reversals because it focuses on price relative to time.

Is the Aroon indicator accurate?

Combined with price action, other technical indicators, and fundamental analysis, the Aroon indicator is the most accurate and useful.

How to read the Aroon indicator?

How Can a Trader Use Aroon Indicator Effectively?

What Are the 4 Types of the Aroon Indicators?

In modern technical analysis, there are four sorts of indicators:

Aroon is a common technical analysis indicator used to pinpoint the start of a trend and indirectly measure the trend’s overall strength and fatigue. The Aroon signals are basic and uncomplicated, making it an excellent indication for novices.

However, Aroon cannot give enough information to initiate and exit deals on his own. As a result, it should be used in conjunction with other indicators to check trade signals and improve trade quality. Aroon performs better in trending markets since it provides a lot of misleading signals in sideways movements. Also, to maximize output, traders should use the Aroon indicator in conjunction with money management guidelines.