Dovish vs. Hawkish: What Is the Difference Between Hawkish and Dovish? 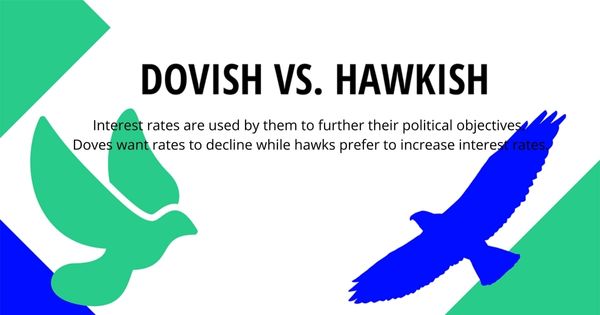 Read more information about the difference between hawkish and dovish in this article.

What Does Dovish And Hawkish Mean?

What Does Hawkish Mean?

Policy hawks and policymakers tend to be primarily concerned about the risk of inflation. They try to cover up prices and wage increases by raising interest rates, reducing the money supply, and limiting the growth of the economy.

Hawks can be difficult for job seekers because employment doesn’t tend to grow as rapidly when hawks are in control. However, hawkish policies benefit those who are living on a fixed income, because their dollar’s purchasing power does not decrease, as it does in an inflationary environment.

What Does Dovish Mean?

A dovish policy or policymaker will work to promote economic growth as opposed to limiting it. This is accomplished by adopting a looser monetary policy that tends to expand rather than contract the money supply. To achieve this, dovish policy makers mostly cut interest rates.

Low-interest rates make it less expensive for consumers to borrow money, which increases demand and spurs businesses to invest in hiring workers and expanding their production facilities.

Dovish tend to be members of the Federal Reserve, journalists, and politicians campaigning for low-interest rates. Alan Greenspan, who was chairman of the Federal Reserve in 1987, was considered hawkish at the time. However, thanks to the bursting of the internet bubble in the 1990s and many related events, he has become more moderate.

Realistically, both investors and non-investors in the United States desire a Fed chair who can move between hawk and dove depending on the circumstance.

The Federal Reserve’s actions and communications to advance maximum employment, stable prices, and moderate long-term interest rates, the three economic objectives that Congress has directed the Federal Reserve to pursue, combine to form monetary policy in the United States.

Whether interest rates rise or fall is not the sole discretion of a sitting president or the chairman of the Federal Reserve. The direction of the Fed is determined by a group of central banks.

The nation’s monetary policy is decided by the 12 members of the Federal Open Market Committee (FOMC), who normally convene eight times a year to discuss the state of the economy and vote on the federal funds rate.

They might also disagree on what the economy requires. As a result, you may hear that the Fed is hawkish or dovish, or that one policymaker or policy influencer is a hawk and another is a dove.

How Come the Fed Would Adopt a Hawkish Position?

When monetary policy advisers in the banking or government sectors are characterized as favoring a hawkish or contractionary monetary approach, it’s typically because they want to reduce the money supply to safeguard the economy from inflation and advance price stability.

Consumers may experience a loss in purchasing power if the cost of goods and services increases as a result of inflation. A modest level of inflation is regarded as favorable for the economy.

It nudges consumers to invest or spend their money now as opposed to stashing it away in a low-interest savings account where it might gradually depreciate. According to the FOMC, a rate of inflation of about 2% is ideal for employment and price stability.

The Fed can reduce inflation using a number of different strategies, such as increasing the federal funds rate and discount rate, selling government bonds, and raising the reserve requirements for banks.

Consumers and businesses often borrow less and save more when access to capital becomes more expensive. As a result, economic activity slows and inflation stabilizes at a more tolerable level.

How Come the Fed Would Adopt a Dovish Position?

A hawkish monetary policy is the antithesis of a dovish or expansionary monetary policy. In order to encourage economic growth, the FED may opt to decrease interest rates, buy government securities from other central banks, and ease bank reserve requirements if it is concerned about the state of the economy. Or, if it believes that employment and growth are on track, it may decide to maintain the same interest rates.

Businesses can borrow more money to expand, potentially hire more employees, or raise compensation when interest rates are lower. Additionally, customers may be more likely to borrow money for expensive products like automobiles, homes, home upgrades, and holidays when they are in an atmosphere with low-interest rates brought on by a dovish monetary policy. Additionally, higher consumption may lead to more job growth. Furthermore, doves choose low inflation over low unemployment.

Can You Be Dovish vs. Hawkish at the Same Time?

The answer is an absolute YES. With regard to monetary policy, some economists as well as FOMC members have a neutral view that is not entirely hawkish or dovish. Because they don’t seem to prioritize one economic goal over another.

Members of the current FOMC have been classified as hawkish, dovish, and neutral. Because of the diversity of opinions, it might be challenging to predict the group’s future move. As a result, nervous investors are closely monitoring any indications of potential developments.

What Are the Effects of Dovish vs. Hawkish Policies on Investors, Spenders, and Savers?

If the Fed increases or decreases interest rates, you might not immediately notice a difference because savings account rates are only tangentially related to those rates. However, financial institutions may act to safeguard their profits when the Fed decreases the federal funds rate by reducing the income on high-yield savings accounts, money market accounts, and certificates of deposit (CDs).

That might be annoying, and you might feel tempted to stop saving or switch your money to riskier investments. However, experts typically advise maintaining an emergency fund with at least three to six months’ worth of living expenses stored in a low-risk account that is accessible and unrelated to the markets.

Savings enthusiasts might want to investigate the more affordable rates provided by online accounts. Regardless of what the Fed does with interest rates, online-only financial institutions consistently outperform brick-and-mortar banks’ savings accounts because they have lower overhead.

The federal funds rate is often used as a reference rate or rate for auto loans, home equity lines of credit, credit cards, etc. The increase or decrease in bank interest rates can indirectly affect the basic interest rates that banks offer to their customers.

When borrowing becomes more affordable and interest rates decline, customers may be more inclined to make the large and minor purchases they’ve been wanting to. On the other hand, as interest rates increase, consumers are often discouraged from borrowing and spending. Before financing a home, a car, or an expensive item like an appliance or home remodeling, they can want to wait for rates to go down.

Impulse purchases may also be impacted. Spenders might decide to save their money rather than spend it, particularly if the interest rate on CDs, and other savings instruments increases. Moreover, to avoid paying high interest on large sums, customers may concentrate on paying off credit card debt and other loans, especially if such obligations have variable interest rates.

Any investment’s response to adjustments in interest rates made by the Fed is not guaranteed. Bonds are one type of asset that may be affected more severely than others. However, almost all of your investments could be impacted.

Making a diversified portfolio with a variety of assets such as stocks, bonds, real estate, commodities, and so on that won’t necessarily respond to fluctuations in interest rates, in the same way, is one strategy to limit your risk exposure. Your portfolio is not sufficiently diversified if all of your investments move in the same upward or downward direction.

According to Fed Chair Jerome Powell, there won’t be any interest rate increases until 2023. But if inflation turns out to be a problem in the future, the Fed might adopt a more hawkish stance and raise interest rates to control expenditure. In each case, customers should consider the potential implications for their plans to invest, save, or make significant purchases.