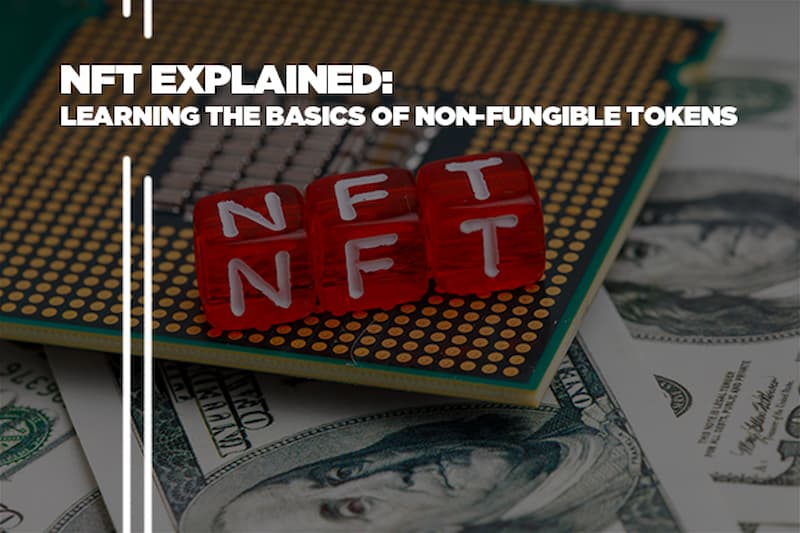 A brand-new industry has come to life thanks to the booming of cryptocurrencies. Let’s learn about NFT and why they are so attractive to investors.

It was one fine day, you were surfing the internet when you came across somewhat eye-catching portraits of monkeys decorated with poppy colorful outfits. You noticed that it was tagged as an ‘NFT’ with a shockingly unbelievable price of more than $1 million. Your jaw dropped and you were completely speechless. ‘What exactly is this NFT thing? And why does it make so much money?’ You thought to yourself as lists of expensive art like this keep coming. There were so many questions.

Thanks to the booming of cryptocurrency all over the world, now, even the youngest internet users also know what Bitcoin is. Although it surely has its ups and downs, Bitcoin remains one of the most desired cryptocurrencies in the world, worth more than $23,000 by mid-august, 2022. Then, does it have anything to do with NFT? What does NFT mean and is it as valuable as these cryptocurrencies? Let’s find out!

What is an NFT?

Generally defined, NFTs (stand for Non-fungible Tokens) are financial cryptographic assets that contain unique identification codes and metadata that distinguish them from others. NFTs are distributed in many forms, which include everything that can be digitized such as pictures, music, videos, in-game assets, and so on.

2 NFTs can have the same visual appearance – 2 identical pictures for instance. However, it is almost impossible for them to have the same value as one asset and interchange with the other because each is distributed and considered unique to a series of decentralized networks empowered by blockchain technology, hence the name ‘non-fungible’. This system acts as a big ledger recording the existence and the activities of all NFTs as well as cryptocurrencies. As a result, one cannot just purposely make counterfeit or double-spend transactions.

When Did NFT Start?

The first known NFT was created way back in 2014, since then, they have been continuously gaining popularity and notoriety. Alongside the huge expansion and impact of the crypto-market, NFTs also made their way to the mainstream and became a new promised land to investors at all levels. They are now known widely as a brand-new way to sell and acquire digital artwork.

A massive explosion and surge emerged in NFT supply and demand, which made 2021 the year of NFT. The global research and consulting firm estimated the global NFT market to be worth $11.3 billion in 2021. The skyrocketing effect of NFT was so remarkable that even big technology companies can no longer remain outside the ongoing party. By the end of the year, Facebook announced that it would be rebranded as Meta, concentrating more on the crypto-world, especially NFT and metaverse.

What is NFT used for?

NFT definition often connects with the act of representing both tangible and intangible items such as artwork, music, collectibles, NFT game items, financial services, and the like.

NFTs have been getting recognition from celebrities like Snoop Dogg, Madonna, and DJ Khaled who have expressed publicly their interest as investors. Even NBA took on these opportunities and created a huge collection of memorable moments throughout the careers of its famous basketball players, including stars like Lebron James, Stephen Curry, Derrick Rose, and many more.

When it comes to examples of NFTs, big names Cryptokitties and Bored Ape Yacht Club usually lead the lists.

Cryptokitties, getting introduced back in November 2017, are unique digital representations of cats with distinctive identifiers on Ethereum’s blockchain. The concept gets even further when they allow these NFTs to reproduce in a way among themselves and create new offspring with different characteristics and values than their parents as new NFTs

Just a short amount of time from their release, cryptokitties attracted a fan base willing to spend $20 million to get the ownership of these kittens. Some fans are alleged to have spent more than $100,000 on the project.

Another significant example is the Bored Ape Yacht Club which has recently sparked controversy due to its extremely high prices of over 10,000 NFTs. Their NFTs have managed to get support and investment from celebrities, which has been pushing their values even higher.

Minting an NFT means creating that NFT. This requires few to no specific skills to make and can be done by anyone with proper guidance. The process involves importing your desired assets and publishing them to a certain crypto-marketplace platform that connects to your crypto-wallet – where your NFTs will be recognized as an official item and get ready for trading.

Non-fungible tokens, using blockchain technology in the same way that cryptocurrency does, are generally safe. NFTs are difficult (but not impossible) to hack due to the distributed nature of blockchains.

The possible risk with NFTs includes losing access to your non-fungible token if the platform that hosts the NFT ceases to exist. Another possibility is extremely simple and rather common when the amount of NFTs keeps increasing – no one wants to buy your NFTs, which eliminates all the trading chances.

The Differences Between NFT and Cryptocurrency

Broadly speaking, NFT and cryptocurrency are built and distributed within a series of decentralized networks empowered by blockchain technology such as Bitcoin or Ethereum, but that is just it.

The most significant difference is the interchangeability. Just like real-world money, cryptocurrencies are meant for trading and therefore must be interchangeable for others, depending on their current values which are not fixed to their uniqueness. In short, 1 Bitcoin can still be exchanged for another 1 Bitcoin without any further problem, whereas two visually identical NFTs cannot be equally exchanged due to their unique identifications as stated above.

The importance of NFT in the Trading industry

Not just following the concept of cryptocurrency, NFT even takes a step further as an improvement. NFT enables the process of digital representation of physical assets, thus bringing the revolution to how both tangible and intangible items are traded online as well as the modern finance systems that make use of these concepts.

At first glance, the clearest benefit of NFT lies in market efficiency. The process of distributing an asset on decentralized markets removes the need for intermediaries – agents, publishers, sellers, you name it – and allows the content creators to connect directly with their customers and supporters. This not only just gets rid of additional fees but also reduces the complexity and shortens the transaction process.

How to Buy NFT

Provided that you are a passionate investor and have already done fundamental research all about NFT, then surely the next step you want to know is how to buy an NFT.

The process is simple and almost the same as how you buy cryptocurrencies. First, you have to choose the desired online exchanges (usually referred to as NFT marketplaces). You must then create a wallet (if you have not already done so) that is supported by the chosen platform. Most of the time, you just get to follow the guidance provided by each marketplace. Below are some of the popular platforms for your consideration:

Investing in NFTs is largely a personal choice. If you have some extra cash with decent NFT understanding, it’s worth thinking about, especially if the piece has meaning for you.

However, keep in mind that the value of an NFT is entirely determined by the willingness of others to pay for it. As a result, demand will drive the price rather than fundamental, technical, or economic indicators, which is for certain not for the faint of heart if you are to make profits from trading NFT without further extensive research.

As educated investors, you should approach NFT just like you would other forms of financial assets. Make sure you do your research and deduct enough insightful information as well as the possible risk. The constantly changing state of NFT in specific, and the crypto market in general, poses both a tough obstacle for any unprepared trader and also an attractive profit opportunity for those who are looking for high volatility environments.