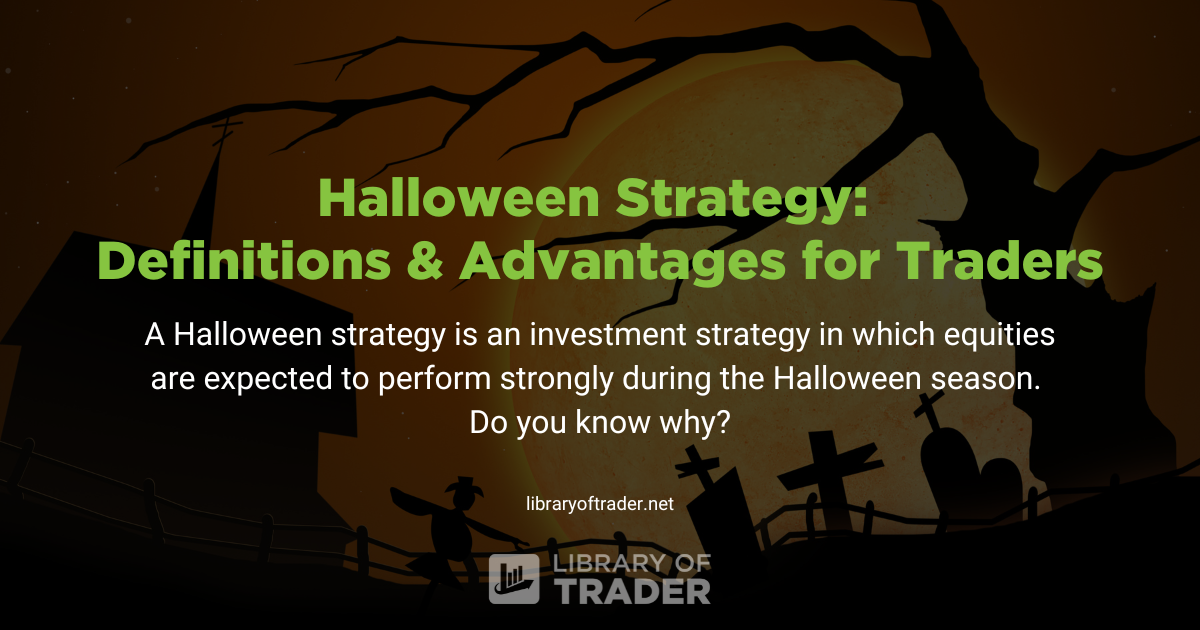 Explore all of the marketing strategies you can use during the Halloween season to attract new customers and engage existing ones.

What is the Halloween Strategy? 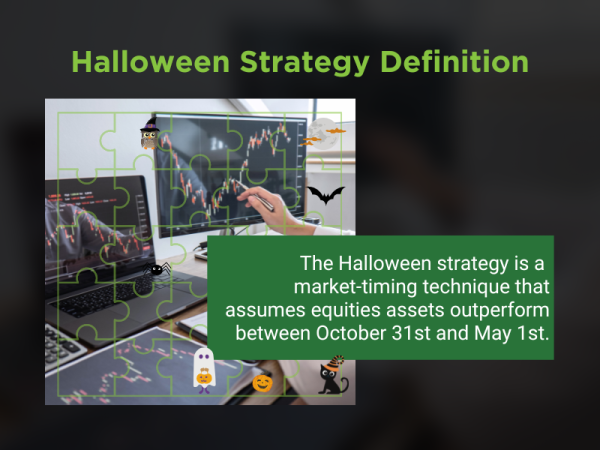 What is Halloween trading strategy?

The Halloween strategy is a market timing strategy based on the hypothesis that equity securities perform better between October 31st and May 1st. Investors who use the Halloween strategy will buy stocks in November and eventually sell them in April. Using this strategy, investors should diversify into other asset classes for the rest of the year. Some investors, however, believe that they should not invest at all during the summer months.

The History of the Halloween Strategy

Halloween became popular in the 16th century in London, England. The phrase “sell in May and go away” appeared frequently in British newspapers, and it became popular among retail investors in the 1980s after The Wall Street Journal published an article on the British stock market.

The expression alluded to how the month of May marks the beginning of a bear market and that investors should exit their positions and instead hold cash.

“Beating the Dow” by Michael O’Higgins and John Downes was published in 1990. The investment strategy book popularized the Halloween indicator, which was based on the British adage “sell in May and go away.”

How Does a Halloween Strategy Work?

The Halloween strategy can be traced back to the years 1694-1776. The concept originated in England, where members of the privileged class went on summer vacation outside of London, leaving their estates unattended. It’s worth noting that the majority of these individuals were stock analysts and brokers. While they were on vacation, they were less active in managing their investment portfolios, causing the stock market to fall. The strategy is based on the idea that investors should sell in May and then walk away.

In other words, the months of May through October are not ideal for investment, and investors should avoid them. For investors, this implies that there are just six months (November to April) during which they can invest. That they can receive better yearly returns in half a year than the investor who invests all year.

When it comes to Halloween strategy, there is some validity. Historical studies reveal that the months of November to April have better capital gains than other months. Those that follow this technique have the ability to rearrange their portfolios every November. They lessen the risks associated with investment by doing so.

The main downside of this method is that investors may be exposed to unanticipated dangers. Remember that, given the possibility of stock market fluctuations, there is no certainty that the returns will be as big as the approach suggests. Furthermore, investors that use this method are likely to miss out on economic booms. Investing over the summer may cause them to lose out on economic booms.

Performance of the Halloween Strategy

The Halloween tactic has evidence worth considering. Historical stock returns indicate that the assumption of the Halloween approach has been mainly true over the previous half-century: the months of November through April have given investors with higher capital gains than the other months of the year.

In 2002, financial manager Sven Bouman and Tilburg University professor of finance Ben Jacobsen conducted one of the first complete academic investigations on the Halloween strategy. It is called The Halloween Indicator, ‘Sell in May and Go Away’: Another Puzzle .The report was published in the American Economic Review. They examined data from major stock indexes and the MSCI Emerging Markets . Index in 37 countries throughout Europe, North America, Asia, Africa, and Australia from 1970 to 1998.

Bouman and Jacobsen discovered that returns were highest from November to April, with returns from May to October being close to zero, if not negative. Gains in October and September were similar across years, indicating that a clean-slash start date for the Halloween approach may be a bit muddy. The effect was strong in European countries.

The Halloween impact is closely related to the sell in May and leave approach. This is the belief that equities perform better between October 31 and May 1, sometimes known as the winter months. After the summer, investors would return to London and renew stock market positions. In exchange, the additional cash invested increased market liquidity.

The Halloween effect, also known as the Halloween strategy, advocates for investors to buy stocks between the end of October and the beginning of May, and to focus on other asset classes between May and October. Fixed income, bonds, and money market investments are examples of other asset types.

In terms of derivative trading, they might theoretically take short positions in May and profit from the alleged drop in stock prices. They may then go long in October, when prices are expected to rise. 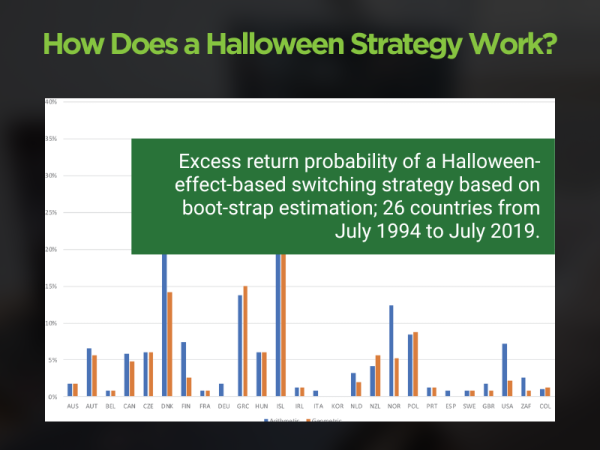 From the report ‘Trick or treat? The Halloween effect in stock markets revisited’ , we can understand more about the function of Halloween strategy and its effects.

So, is Halloween Strategy an effective trading technique?

Historically, the ‘sell in May and go away method’ may have allowed investors to escape summer slumps or losses. From 1920 through 1970, shares climbed 65% of the time between the end of October and the beginning of May. This compares to a 58% increase between May and October of the same year.

Having said that, there is significant debate over how effective the sale in May and Halloween impact methods are anymore, and whether they should be utilized at all.

It is important to note that the sell in May method is a timing technique that should only be used by expert traders and investors. In actuality, returns might vary throughout the year and may be higher in the summer rather than the winter. When compared to the sell in May, forms of technical and fundamental analysis may be significantly better at anticipating market swings.

If you want to learn how to use this strategy but aren’t sure about its effectiveness, use our Coupon code: BLOGNOW10 to shop courses now!

With the code, you’ll find the best course at the lowest price!

What is the cause of the Halloween Effect?

The exact reason for this seasonal anomaly has yet to be discovered. Although many market analysts believe that investing professionals’ summer vacations have an impact on market liquidity, these notions are based on the assumption that higher participation equals increased earnings.

The highest levels of volume and participation, however, are witnessed amid market crashes and other comparable financial disasters. As a consequence, while increased engagement may be associated with benefits, it is doubtful that it will result in those benefits.

Does Halloween consumer spending have an economic impact?

Yes. According to the National Retail Federation, American spending on Halloween will reach $10.14 billion in 2021 and has been steadily growing for several years. Individual spending was expected to reach $102.74 for products such as candy, decorations, costumes, pumpkins, party supplies, and cards.

Does this investment technique outperform buy-and-hold?

Based on historical stock returns, the notion of Halloween approaching that the months of November through April actually awarded investors with bigger financial gains than the other months of the year appears to have been accurate for much of the last 50 years.

The statistics also show that a May selling strategy outperforms the market by more than 80% when employed over a five-year horizon and more than 90% when used over a ten-year horizon.

The Halloween effect is a strong and persistent seasonal cycle in global stock markets. In general, whether you believe in this approach is entirely up to you. It should be noted that there are differing viewpoints on this strategy. As a result, Halloween’s strategy is both a mystery and an empirical anomaly. The fact that it has been able to provide impressive returns over time is what makes it so appealing to investors. Stock market dealers, on the other hand, have been unable to explain it away.

Using the Halloween strategy in a single year is dangerous, but history shows that those who use it regularly over time come out ahead. This does not guarantee that it will continue to operate in the future, but few calendar rules have as much support as the Halloween indication.